Triaxial test equipment is used for shear strength testing on soil specimens. Triaxial shear strength is one of the most versatile soil strength tests in geotechnical engineering. More complex than a direct shear test, it allows control of specimen stresses in perpendicular directions. Drainage in the sample can also be controlled and specimen pore pressure can be monitored. 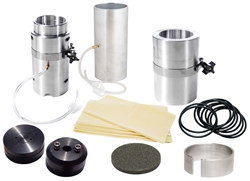 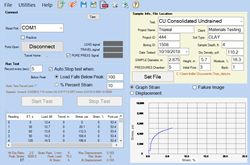 Test specimens may be obtained from an undisturbed sample or prepared as remolded samples. The specimen is sheathed in a protective latex membrane and placed inside a fluid-pressurized chamber, which is then attached to a Load Frame. The sample is vertically loaded and sheared while keeping the rate of axial deformation constant. These tests determine strength and the stress-strain relationship of the soil.

There are several different types of triaxial compression tests: Consolidated-Drained (CD) is performed according to the ASTM D7181 standard test method, Consolidated-Undrained (CU) is implemented using the ASTM D4767 method, and Unconsolidated-Undrained (UU) is performed according to the ASTM D2850 testing procedure. In the CD test, the sample is allowed to drain, whereas the CU and UU tests are performed on a sample that remains undrained. Samples in the CD and CU tests are allowed to consolidate, or adjust, during the test. In the UU test, loads are applied quickly and the sample remains unconsolidated.